"I'll do my best, but I can't write as beautifully as Mary does. Her writing is just like copper plate," Minnie said...
-Little Town on the Prairie by Laura Ingalls Wilder

When I was a little kid, I wondered what in the world a copper plate - or any kind of plate - had to do with handwriting. When I got a little older, I realized it had something to do with printer's plates, but still didn't know why a copper one would produce writing more beautiful than any other plate.

The beauty of it actually has as much to do with the nib and technique of the writing as the copper plates. Copperplate Script uses a sharp, pointed nib held at a 55 degree angle. The sharper nib and that particular angle enables a more precise line to be drawn than most "fancy" (calligraphic) handwriting, most of which uses a flatter nib.

Copper, due to its particular elemental properties, allows cleaner lines in engraving than other metals; thus, when engraving plates to make handwriting copybooks for student to copy from, copper plates were preferred. The font derives its name from these plates. 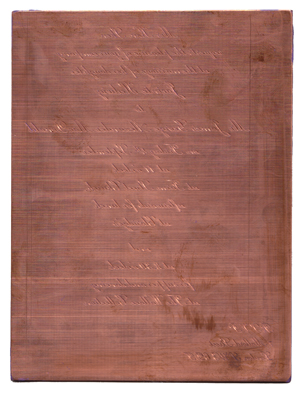 It is interesting to note that because of the clean etching properties of copper, documents requiring a royal seal were historically inscribed on copper; this link to royalty is another cause of the popularity of Copperplate Script in the Victorian era.