Today the Laura Ingalls Wilder Museum in De Smet posted an article about George Wilmarth, an early citizen and merchant of the town. He, his family, and his store are mentioned in the Little House books. I thought I’d share a few photos on the subject, as I’ve been corresponding with some of George’s descendents in research for Little Lodges, and they have been very helpful and generous in sharing information, documents, and photographs. Thanks to Peggy Ward and Donna Davidson.

Here’s George as a young man. He served in the Union Army in the Civil War, re-enlisting twice. 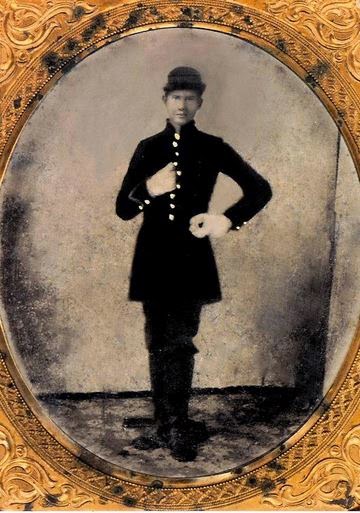 Here’s a photo of him some time later. 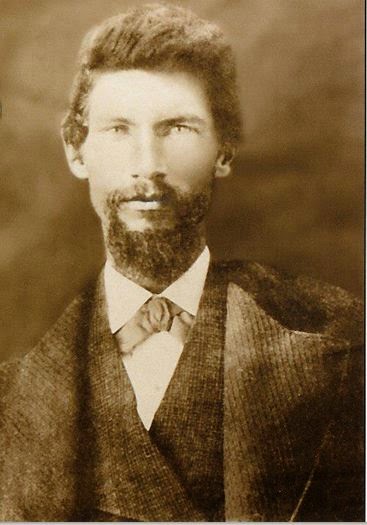 And here’s his family. This is his second wife Margaret and 9 of his children, taken after his death. One of his children, a son, died at the age of two. He also had another child with his first wife. 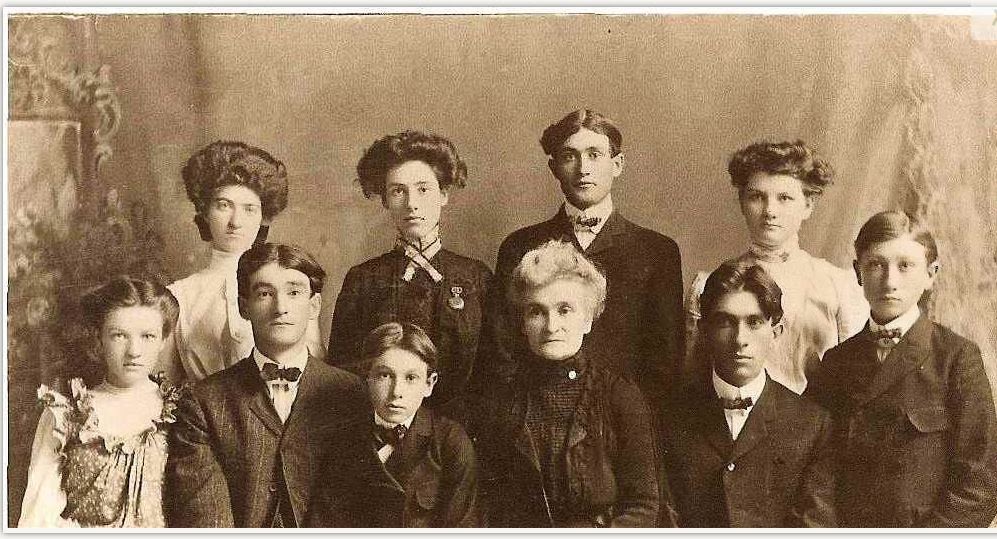 George joined the Masonic Lodge in De Smet, serving in several offices. He donated a sword to the Lodge, which is believed to be his Civil War sword. Notice his name engraved on the blade. The Lodge still has this sword.

George is buried in De Smet (in St. Thomas Aquinas, the Catholic cemetery adjacent to De Smet Cemetery). His headstone was provided by a veterans’ association. 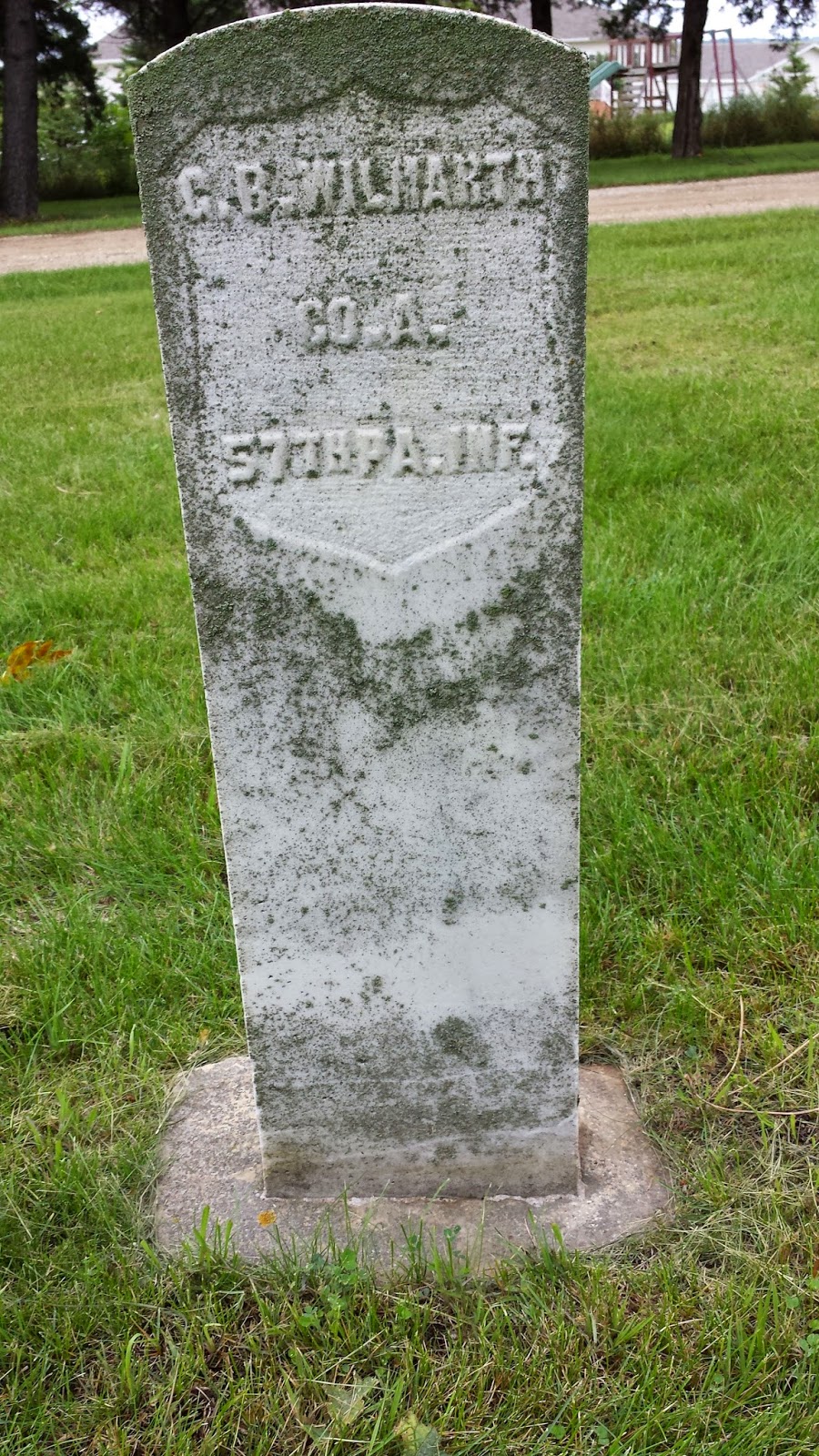 
Wilder Days had a really good turnout. It was a beautiful day - got a little warm in the afternoon, but not intolerable.

As usual, there were many things to experience. In town, vendors and crafters were set up in the square, and antique & classic cars lined the street for the car show. The Mansfield Area Historical Society was open, displaying many artifacts of the town’s history - including items of Laura and Almanzo. That’s where I was most of the day: they kindly had me set up there selling & signing my books. 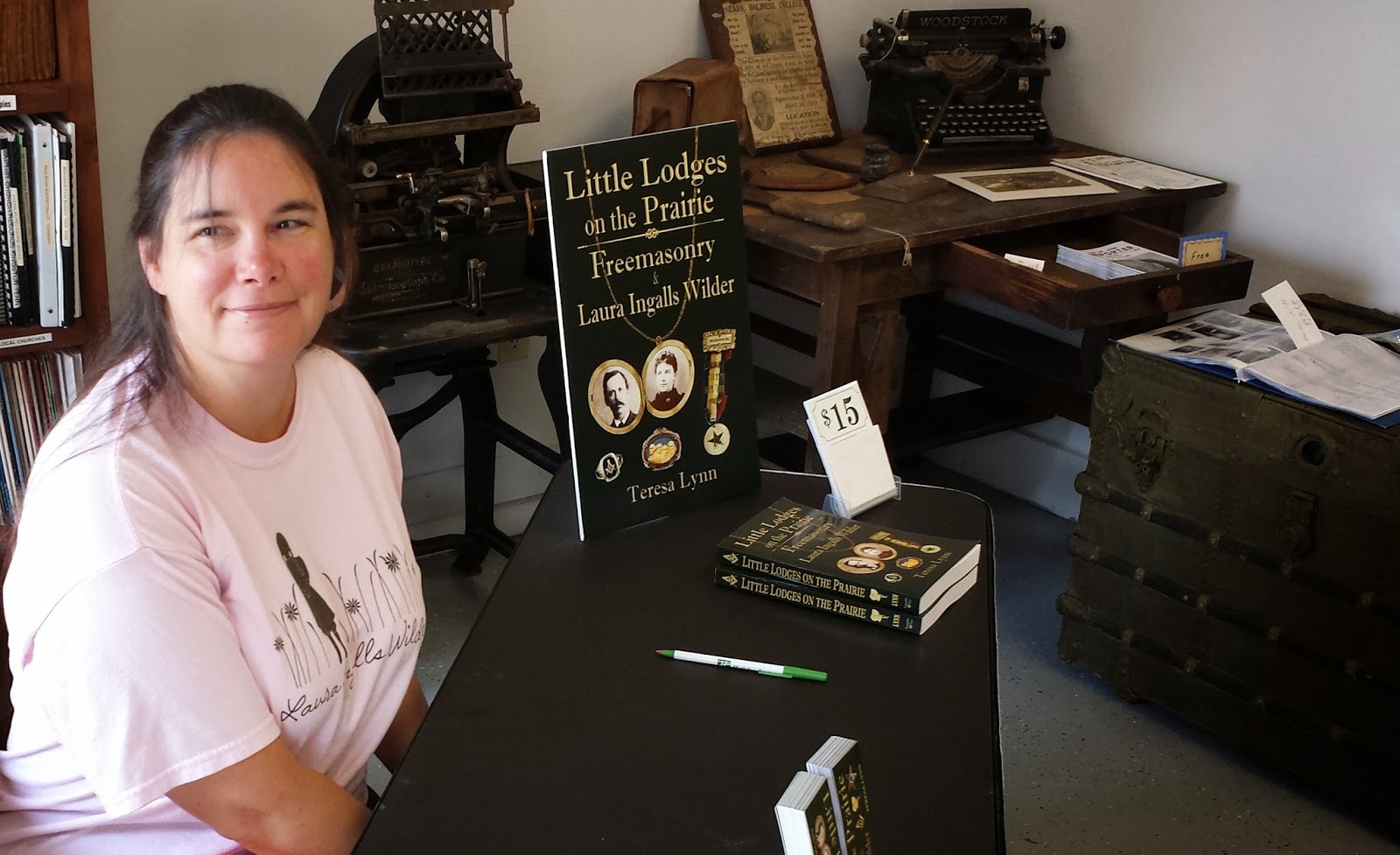 I did take a break to go to Rocky Ridge in time for Lucy Lee Flippin’s reading with Bill Anderson. They read a scene from Farmer Boy - the blacking brush thrown on the parlor wall - and then Ms. Flippin read Eliza Jane’s account of her homesteading experience. 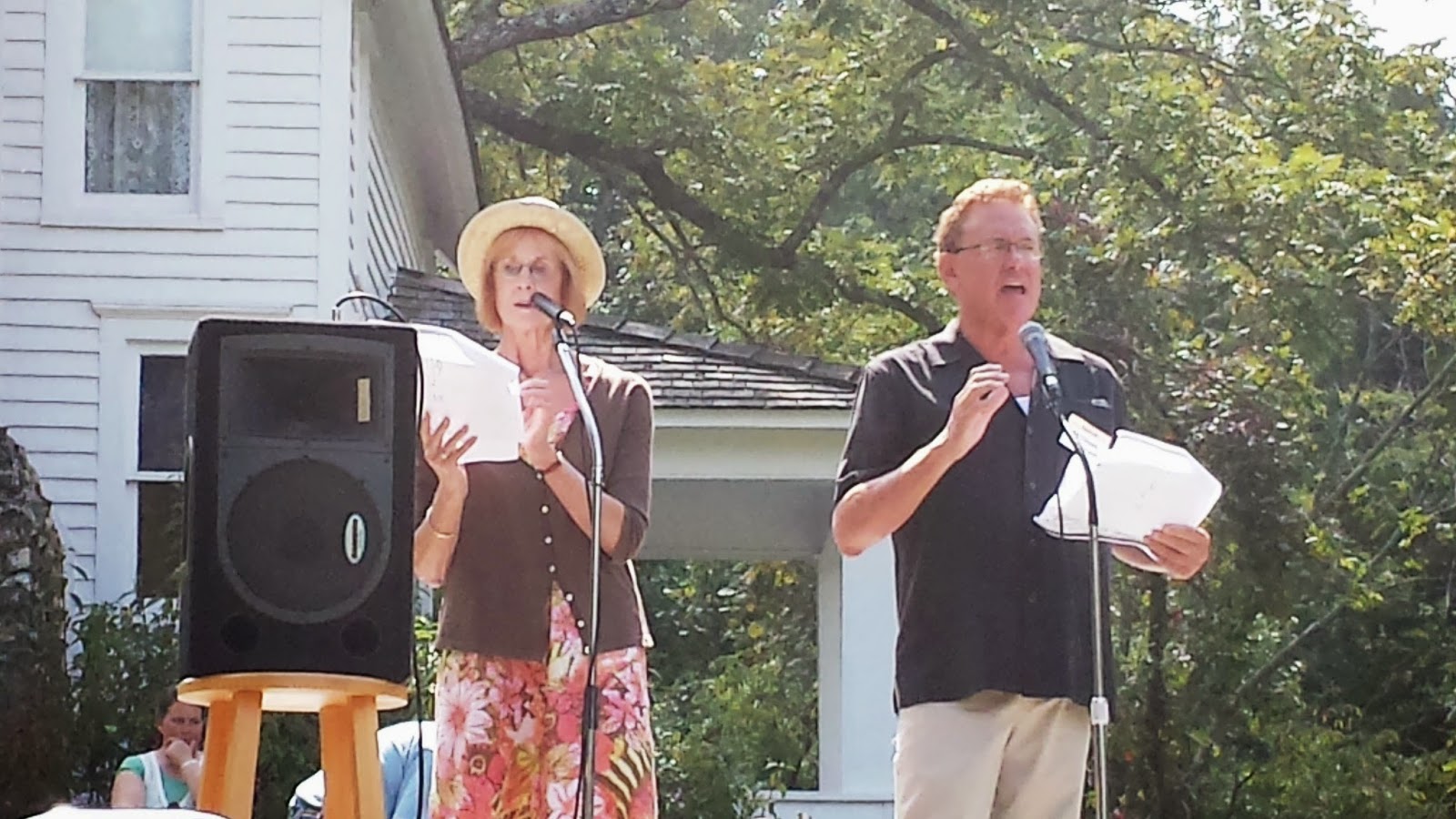 Crafters were scattered around the museum grounds, too. Also at the home site, the stairs in the farmhouse were opened so that you could peek upstairs. David Scrivener played tunes on Pa’s actual fiddle. This year, the Association held a fiddling contest, so it was a very musical day. Many other contests took place throughout the day: Laura look-alike, beard, watermelon spitting, and greased pig, among others...something for everyone. You can see photos of many of these activities on the Museum’s Facebook page.

That about wraps up my Laura season. We’re back in Texas now, and boy, is it hot! The cooler temperatures up north will sure be missed for the next couple months.


Last weekend was fun time in Pepin. To begin with, the weather was perfect: a sunny, early-autumn day.

Unlike the last few events I’ve been at, which were either for Eastern Star or, if Little House-related, featured cast of the television show, Laura Days in Pepin was all about family fun.
It was the first place I’ve been to that almost every single girl - along with many women - were dressed as Laura (or Mary, Ma or Nellie), and there were many boys and even a few men in period dress as well.
Some of the events included old fashioned spelling bees, Laura contests, square dancing, and a fiddle contest. Although I was set up selling books, my booth was near enough the main stage to hear all the action, so I got to enjoy the festivities more than I thought I would.

I made sure to take a break in time for Sarah Sue Utoff’s “In the Kitchen with Laura” presentation. I’ve enjoyed her posts on this subject, and it was a real treat to see her in action. I was enjoying it so much that I forgot to take a picture!

Saturday (Sep. 20) I’ll be signing my book in Mansfield, MO for Wilder Days. Come by the Mansfield Area Historical Society on the square and say hello!


We (meaning hubby and I) had a great time in Keystone at the Holy Terror Days. Here’s a quick recap.

I had the privilege of attending a meeting of the Chapter (Eastern Star) that Carrie Ingalls belonged to for 35 years. I met some wonderful people and got reacquainted with others I had met before.


The historian of the church to which Carrie belonged met with me and allowed me to search through their records. It was neat to see this church, as it is the original building and still has the same seats. They also still have the original pulpit, although it is not used as such any longer. 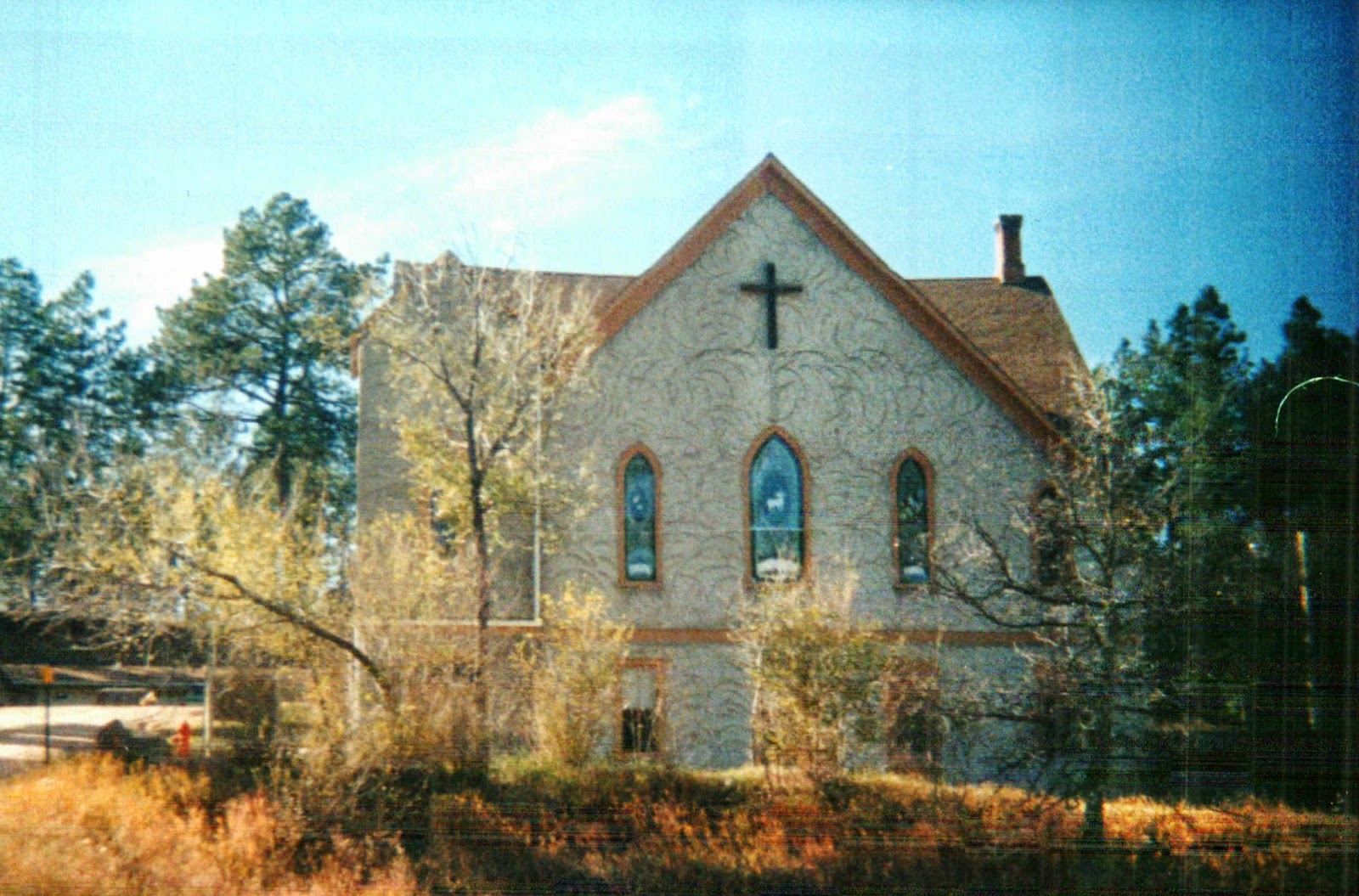 Stopping at the museum to see what we could do to help get ready, we met Bill Anderson, author of so many informative books about Laura Ingalls Wilder and her family, and had a really nice visit. He told me something about my book that I didn’t know myself. On page 156, there is a copy of a note Laura wrote to her Chapter before moving from De Smet, asking for a demit so that she could join another Chapter where they settled. Mr. Anderson said that is the earliest known extant letter of Laura’s (not to be confused with the earliest known writing of Laura’s), which I had not been aware of.

We had dinner at Ruby House with the cast.

Saturday I didn’t get around much as I was set up selling/signing books. That was okay, though - hey, I was selling books!  - as I got to visit with Sandra Hume and Lila Lytle between signings. My table and I were photographed by a local news crew and a local travel magazine crew. (One of those photos is here.) And I did see the parade in the morning.


Sunday I didn’t set up, so that I could do the fun stuff, like getting autographs. Lindsay Greenbush even wrote me a thank you message, which was special.


Surprisingly, after meeting me for only about two minutes the day before, Hersha Parady recognized me. Wish I had her memory!


Charlotte Stewart signed my original Beadle Bag for the third time. (That one’s been around since 2012.) She donates 10% of the profits to organizations that provide treatments for underprivileged women with breast cancer. Isn’t that terrific? With all the cancer in my family, I really appreciate it.


After the Q & A session, I had a brief visit with Radames Pera about Freemasonry. Did you know that the Jimmy Kimmel show is filmed in an old Masonic Temple? Neither had I.

Oh, and Alison Arngrim confirmed that she will be in Austin next April! Yes! And she graciously signed a bookmark for me, because I already have her book and photos from previous events (this is a business for them, after all, and you’re really not supposed to ask them to sign anything you don’t purchase).

Check out the chairs the cast sat in for the signings. They are the chairs from the original Masonic Lodge that Carrie and her husband David Swanzey belonged to. Since the signings were in the old Lodge building, it seemed appropriate. Alison Arngrim is sitting in the Master's chair. I'm sure Nellie wouldn't have it any other way!

Next weekend I’ll be in Pepin, Wisconsin for Laura Days. Would love to see you there!


A friend reminded me of this poem the other day.

THE golden-rod is yellow;
The corn is turning brown;
The trees in apple orchards
With fruit are bending down.

The gentian's bluest fringes
Are curling in the sun;
In dusty pods the milkweed
Its hidden silk has spun.

The sedges flaunt their harvest
In every meadow nook;
And asters by the brook-side
Make asters in the brook.

From dewy lanes at morning
The grapes' sweet odors rise;
At noon the roads all flutter
With yellow butterflies.

By all these lovely tokens
September days are here,
With summer's best of weather,
And autumn's best of cheer.

But none of all this beauty
Which floods the earth and air
Is unto me the secret
Which makes September fair.

'Tis a thing which I remember;
To name it thrills me yet:
One day of one September
I never can forget.