You know how in the old days, newspapers reported all the local gossip: who visited whom, who got new furniture, who sold a horse, who made a trip, and so on?
In April, 1909, the Mansfield Mail reported that "Last Saturday Mr. and Mrs. A.J. Wilder took in the sights at Springfield."

Nothing unusual in the printing of that.
These kinds of snippets were put into certain pages of the paper fairly randomly, often used as filler. The item noted above filled a small spot between the "bargains" column of local stores and a display ad.
The next week, this notice appeared in the paper. 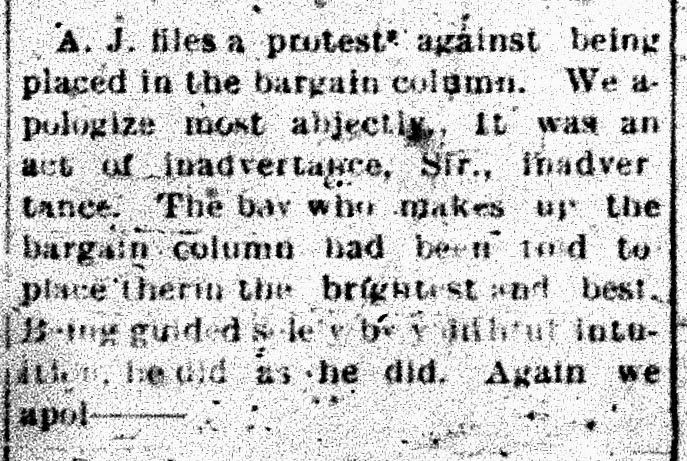 "A.J. files a protest against being placed in the bargain column. We apologize most abjectly, it was an act of inadvertance, Sir, and inadvertance. The boy who makes up the bargain column had been told to place therein the brightest and best. Being guided by youthful intuition, he did as he did. Again we apol--"

Isn't that a hoot? I love it.
(By the way, the misspelling of inadvertence is their own.)