An uncomfortable moment at an otherwise terrific event


Today I went with my girl to the Texas Book Festival.
Since it was a literary event, of course I wore a shirt promoting one of my favorite authors. 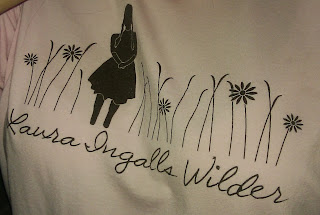 No better place than a book festival, where readers, writers and publishers are milling about, to let it be known that I am a researcher of one of America’s most endearing and enduring writers, right?
We went specifically to hear Sherman Alexie, one of my girl’s favorite authors. I have only recently been introduced to his work, through my girl, although he has been a popular, award-winning author for decades. As a Native American, he writes from that perspective. As she read his books, my girl and I, and others, would have some good conversations about culture, prejudice, and similar topics.
But somehow, I just wasn’t thinking about that when I chose my apparel. Until…
Mr. Alexie began to talk about one of his banned books.
I am strongly against censorship, and believe in the right of any/everyone to express their views.
However, as I realized I was wearing a shirt featuring an author banned for insensitivity to Native Americans to a reading by a Native American, I admit that I wished I had thought that one through a little more.
Of course it felt like Mr. Alexie looked at my shirt every time he mentioned anything related to prejudice. I know that’s not true, but it was uncomfortable anyway.
And don’t take that to mean I’m embarrassed by Laura Ingalls Wilder. She was a product of her times, and it would not have been accurate for her to portray relations between whites and Indians as all hunky-dory. I just wish I had been a little more sensitive to the situation.
Other than that, I had a great time. I really enjoyed hearing Mr. Alexie, much more than I thought I would. I will be reading more of his works.
Posted by Mama Hen at 7:23 PM 10 comments: